The working development process of the curry powder packaging machine: Firstly, the roll film is clamped, the film is passed through a set of guide rollers, and then introduced into the lapel former. After the technical former is rolled into a cylindrical shape, it is wrapped outside the feeding tube, and the film is rolled. A coding machine and cursor detection devices are also installed between the former and the former. 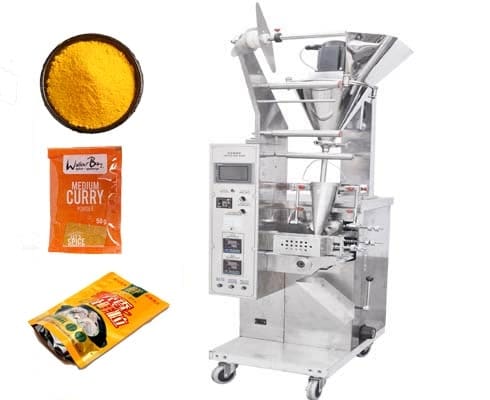 The longitudinal sealing block at the front end of the former starts to act to analyse the central sealing mechanism of the bag tube and heat seal longitudinally, and at the same time, the closing capacity of the two transverse sealing blocks heat seal the bag opening transversely. Then use the material to fill the heat-sealed packaging bag from the blanking tube. The traction control device needs to automatically detect different positions according to the system cursor to pull the bag tube down along the blanking tube. When the packaging bag stops, the printer finishes printing some by itself. Action, the vertical seal and the horizontal seal are sealed again, and then the cutter installed in the middle of the horizontal seal block cuts the packaging bag along the incision to complete such a product packaging production process. From the working and learning process of the packaging machine, the problem can be broken down into the following basic actions:

These are the curry powder packaging machine engineering and process can be divided into seven parts, I hope it can be helpful to you, pay attention to this site to learn more packaging machine industry information.

Ways to increase the speed of curry powder packaging machine